I have had the scope for three weeks now and have used it three times. That’s good going in the UK in case you possibly thought that’s bad; it’s not uncommon to wait for six weeks for a first light in our cloudy climate!  Anyway, leaving aside the usual British moans about our weather……

The FSQ is so very to use.  Just point it, focus and forget.  I am using Baader LRGB filters.  These ones in 1.25″ version in an Atik EFW2 filter wheel.  These filters are stated to be parfocal.  However, with my Skywatcher ED80 telescope I found they were not.  The focus wandered slightly between the filters.  I normally focus on the Luminance channel first.  I then grab LRGB in that order.  But by the time I got to the blue filter I found stars were becoming bloated, not massively – but enough to take the edge off the picture.  This problem is definitely not an issue with the ED80 stock focuser – I could adjust that sufficiently to make it rock solid –  but is more attributed to the differing light wavelengths coming to a minutely different focus with the ED80 primary objective, blue is always affected worse.  This is hardly surprising at the ED80 price point and indeed, the ED80 is an excellent telescope for its price.  When using the FSQ though the focus is perfect on all LRGB filters and is as perfect on all four corners of the image.  It just makes the scope so easy to use.  I sincerely hope this is also the case when I get some Baader narrowband filters as well.  However. considering the FSQ is ten times the cost of the ED80 is it ten times better?  Of course not.  That is not the way of things – it is diminishing returns at this end of the market as is the case with any other premium product.  You pay a massive amount more to make it 20% better.

The FSQ-85 focuser is heavy and robust.  However, a slight word of caution here that knocks a mark off the score for the FSQ-85.  I have found that with my filter wheel and camera attached (EFW2+Atik460 = just over 1kg so hardly that heavy) I find that I need to have some focus knob lock applied or else the focuser can start to very slowly slip when pointed at over 50 degrees or so above the horizon.  This came as a bit of a surprise to me since I have read some web articles that state the focus lock can be fully undone and the focuser does not slip even when pointed vertically.  This is not my finding; I need some focuser lock applied to “brake” the slip and can then use the fine focuser.  That makes me give the scope 9/10.  Otherwise it would have got a perfect 10/10.  I penalise it a full mark since the focuser action is a critical part of using a scope and at this price point I should not be expected to start shelling out yet more money for after market focusers or fiddling with tightening screws etc.  This is a Rolls-Royce scope; you don’t buy a Roller and expect to be under the hood tinkering on day 1.  I need to do some further research into this.  Maybe the focuser can be “tightened” perhaps….. Or maybe my expectations are unrealistic and this is the whole point of having the focus lock.  To be fair the use of the lock screw is pretty intuitive and easy.  Had it not been I would have sent the scope back.

What is very commendable about the FSQ is the accuracy of the Camera Angle adjuster and focuser working together.  So, when I achieve precise focus and then need to turn the CAA to frame the subject (something that I will be doing all the time) the focus does not shift even a fraction.  I checked it out by slewing the scope to a bright star and putting on the Bahtinov mask after so adjusting the CAA after previous focus – the focus had not moved at all.  That shows how accurately the scope and its bits are made.

I have used the FSQ on two objects so far, in both cases at native focal length – I have yet to use it with the reducer even though I bought the reducer with the scope.  I grabbed further data on M33 Triangulum galaxy to add to the image on my previous post and I also grabbed RGB on the Double Cluster.

This image of M33 in Triangulum (lower quality here as a jpeg) has two hours of Luminance and 90 minutes each of RGB. The Luminance was 1×1 binned and the RGB was 2×2.  The data was captured on the evenings of 21 and 25 November 2013 from my back yard (semi light polluted).  I also should really have been using my IDAS Hutech Light pollution filter! All processing was in Pixinsight.  The image needs more data to really let the spiral arms and the HII regions jump out.  It could use some Ha as well.  Nevertheless, it is coming along nicely I think.  The two data sets are closely aligned and that will allow me to grab a whole lot more data.  Next time it is clear I will grab a lot more luminance and Red data.  Indeed,  I might push the subs out to 15 minutes.  What stops me doing that normally is that Nottingham is under the flight path for US West Coast flights from Heathrow that tend to plague my exposures!  It hurts throwing away otherwise perfect 15 minute subs!  However, I have recently discovered that Pixinsight’s Windsorised Sigma clipping routines are extremely effective at removing plane and satellite trails, especially if I use dithering during capture.

The important thing to note is the stars are nice and round in the corners so the scope is performing very well!  You can see this image at higher resolution here.

Next up is the Double Cluster in Perseus.  This data was captured on 4th December 2013, again from my back yard.  This time though I used the IDAS LP filter and this has reduced light pollution light splatter very effectively.

Star field pictures show errors in an optical system all too readily and I am very pleased the Tak came through this test very well I think, despite very mediocre seeing on the night.  Here are 30 minutes per RGB channel at 5 minutes exposures, binned 1×1.  Higher resolution of this image is here. There is no luminance here at all.  Also, no flats here since I mistakenly captured the flats at 2×2 binning as I normally bin 2×2 on RGB!  Doh… Oh well, it still came out quite well with Pixinsight’s DBE tool to remove the vignetting.

So, to sum up, I am very pleased with the scope so far.  It is optically wonderful.  It looks the part and I have great pride in owning it.  The build quality is superb.  The focuser is good and robust but has slight slippage that has taken the edge off a tiny, weeny bit.

Would I buy again?  Absolutely!  This is scope for life and look forward to doing some great things with it.  I might even buy a FSQ-106 to go with it as well 😉

Next blog entries will be how I connect all the bits together to connect to my Atik EFW2 at both native and reduced.  Another blog entry will be about how I mounted the scope to my NEQ6 and guide-scope. 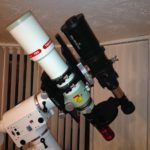