I captured two ISS transits of The Sun on the weekend of 12-13th June 2021.  Both images and videos were taken with my Lunt Systems T60Ha Hydrogen Alpha telescope and ASI174MM camera.

The transit above was not quite visible from my back yard and so I had to put all the gear into the car and drive to about three miles from where I live.  I set up about 20 minutes early to ensure I was ready to capture the data for the image above.  I was not quite located exactly where the ISS crossed the precise diameter of the sun – I was about 300m away!  Yes, a very small change of position on the Earth’s surface really does make that much difference to the visible track of the ISS across the face of the sun.  The ISS was about 520km away when this sequence of images were taken.

The ISS moves much more quickly than the slowed down image would suggest.  It crosses the disk of the sun in only about 2/3 of a second.  Literally blink and you will miss it.  I started the image capture about 30 seconds ahead of time to ensure the camera is running at a high rate prior to the ISS’ arrival and to account for any error in the ISS’ arrival calculations.  As it happens the ISS transit finder tool  https://transit-finder.com/ is accurate to the second.  By the way, an iphone connected to a 3/4G network is accurate to within a few thoudsandths of a second. 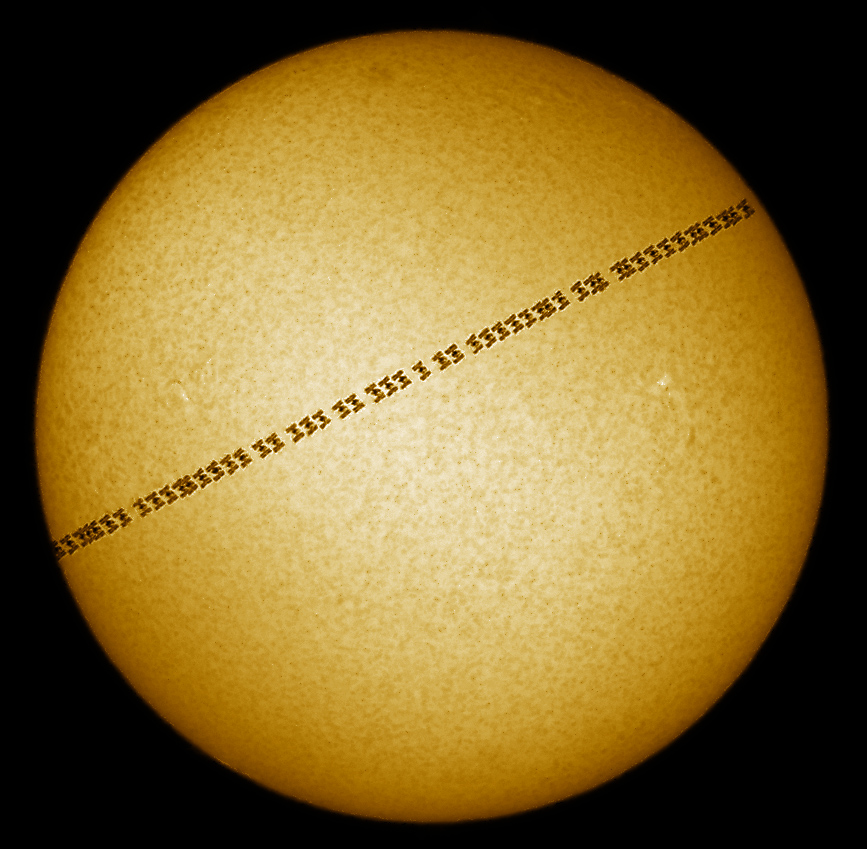 To the left is a composite image of the camera exposures, running at 124 frames per second.  The ASI174MM camera has an electronic shutter that captures the entire 1936×1216 HD frame in buffer and then scans that entire frame before transmitting the frame over the USB3 bus at 5Gigabits/second before capturing the next frame.  A high speed laptop with a solid state SSD is required in order to write images at this data rate.

The day afterwards, Sunday 13th June, there was another ISS transit, this time visible from my back yard, albeit as a chord across the sun and not across the diameter (to get a full diameter I would have had to travel with my gear about a mile away).  I could have again driven out in the car, but I quite liked the idea of the ISS crossing a chord.  This mage is below.   It had been perfect clear and hot all morning before the transit and all afternoon afterwards, but just about 30 seconds before the ISS transit occurred the only cloud in the entire blue sky decided to pass in front of the sun!!!!  Had the transit occurred ten seconds before or ten seconds later I would have missed it.  Fortunately there was a tiny thin bit in that cloud that allowed me to capture the transit, although some faint cloud is visible.  I kind of think that the wispy cloud adds to the atmosphere of the image, wouldn’t you agree? 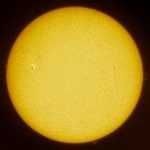