Not the most exciting of images but significant for what is actually shown here.  Just looking at the photo on the above left, you’d be forgiven for thinking this was just an image of a star field, a boring one at that. However, this is a picture of the Quasar 3C273 in Virgo, one of the most distant objects possible for an amateur astronomer with instruments available to the average amateur to see.  Light left this object two billion years ago!

3C273 is the 273rd object in the Third Cambridge University catalogue of radio objects.  It was discovered as an extremely bright source of radio waves long before it was identified visually.  It was the first ever quasar to be discovered in 1959.

It represents an extremely active core of a very distant galaxy, so distant that we only see the core and not the outer parts of the galaxy because of the vast distance.  Matter is circling around a supermassive black hole and is energised to such an extent that it is visible across the universe.  Our own galaxy would not be visible at such a distance suggesting how incredibly bright the quasar actually is.  We also know, through daily variations in the light intensity that the source cannot be more than a light-day in diameter!

Image shows the above image of 3C273 with other galaxies in the PGC catalogue (Principle Galaxies Catalogue) in the same field of view.  3c273 is PGC41121.

Image taken with a TEC 140 refractor in April 2020 (during Coronavirus lockdown in the UK).  Thirty minutes each in R,G,B.as two minute exposures binned 1×1. 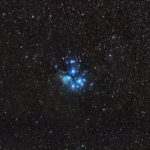 M45 in a Widefield 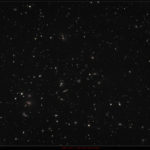