M87 is a supergiant elliptical galaxy at the heart of the Virgo cluster of galaxies and is visible in many pictures of the famous Markarian’s Chain.  It is about 65 million light years away and, after the Sun, is the brightest source of radio waves in the sky – at that vast distance!  The galaxy is one of the most massive in the local universe at two hundred times the mass of our own Milky Way galaxy.  M87 harbours one of the most massive Black holes in the Universe at 8 billion solar masses.  The galaxy is surrounded by a swarm of globular clusters, about 12000 of them, compared to only 200 from our galaxy.

The galaxy is so large that from The Earth the extended galaxy is almost the size of the full moon.

Imaged from by back yard in Nottingham, UK with my TEC 140 refractor and Atik 460 CCD camera with Astrodon E series LRGB filters on my MESU mount.  Data acquired April 2020 (middle of the Coronavirus lockdown in the UK) and is comprised of the following data – everything binned 1×1.

The closeup above shows the famous “jet” emanating from the central black hole (at “one o’clock” in this photo) in the core of the galaxy and the latest theories suggest this is radiation being emitted from the poles of the black hole at almost the speed of light.

Also can be seen in this picture some of the many globular clusters that orbit M87.  Some of M87’s globular clusters are hugely larger than the Milky Way’s and are giant enough to be seen from 65 million light-years away.  M87, in growing to be such a huge galaxy, is though to have consumed many other galaxies during its history and is thought to have robbed the globular clusters of the now dead galaxies. 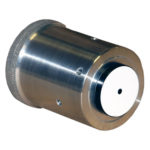 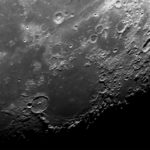